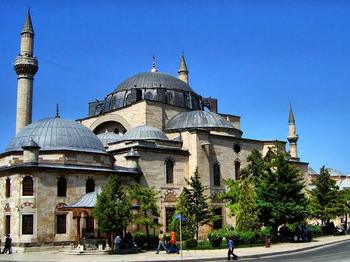 We pick up our precious guests from the airport and place them in our hotel.

Our first stop after breakfast at the hotel is Ancient Roman Hippodrome in Sultanahmet Square.

Ancient Roman Hippodrome: It was built in the 2nd century A.D. It was restored by the Roman Emperor Constantine in the 4th century. It was tried to be likened to the Circus Maximus Hippodreme in Rome.

After visiting the historical arena we pass to Hagia Sophia, which was built meticulously and as a symbol of Christianity by the Great Roman Emperor Justinianus.

Hagia Sophia: This magnificent cathedral bearing the name of Holy Wisdom was opened with a great ceremony in the 6th century. Justinianus took care of every detail one by one and had the columns and marbles used in it specially brought from ancient cities. One of the most striking features of Hagia Sophia is that its dome is larger and higher than other churches. In the Mosaics inside, Mary, Jesus and his godfather, angels are depicted abundantly.

After our Hagia Sophia tour, we pass to Basilica Cistern that is also mentioned in Dan Brown's novel Hell.

Basilica Cistern: It is one of the most magnificent structures of Istanbul. It was built by Justinianus in the 6th century. It consists of numerous giant marble pillars rising above the water. The most striking column of the cistern is the marble with the head of Medusa.

After our tour, we go to our restaurant where you can taste Turkish Cuisine for lunch. Afterwards, we continue our tour with Topkapı Palace, one of the most beautiful examples of Turkish architecture, which hosted the sultans of the Ottoman Empire.

Topkapı Palace: This palace, where you can witness the Ottoman State tradition closely, was built by Fatih Sultan Mehmet in the 15th century. It contains rich collections that you cannot see anywhere else in the world. It is also home to numerous collections, including the Sacred Relics, the Spoonmaker's Apple, the Weapons and Armor Collection, Chinese porcelain and Sultan Portraits.

After completing our tour of the palace, we will go to the Grand Bazaar for shopping and spare time.

Grand Bazaar: One of the most interesting places in Istanbul with its colorful shops, the Grand Bazaar is one of the oldest markets in the world. In the Grand Bazaar, you can visit the carpet and jewelery shops where you can see Turkish motifs, and taste Turkish delight and coffee.

After spare time, we go to our hotel to rest. If you wish, you can join the Turkish Night in the Bosphorus.

After breakfast at our hotel in the morning, we will set off for Çanakkale.

Our first stop will be the Ancient City of Troy, where the Trojan Wars started because of the legendary love story of Helena and Paris, which is the subject of the movies. We will start our tour of the city, which is on the UNESCO World Heritage list, with the Trojan Horse.

Trojan Horse: The most favorite object of the ancient city. The move that ended the Trojan War. This horse, in which the Spartan King Odysseus hid his soldiers, both changed the course of the war and became the symbol of the war.

Afterwards, we continue our tour of the city with the theatre, baths and various finds. You will be fascinated while visiting the city, which is also mentioned in Homer's famous Iliad. After our ancient tour that takes us back 5000 years, we’ll go to our restaurant for lunch.

After lunch, we set off for Pergamon Ancient City, one of the distinguished works of the Hellenistic period.

Pergamon Ancient City: It is derived from the word "perg", which means castle, founded in the 7th century BC. The city, which is on the UNESCO Heritage List, has been exposed to many attacks throughout history due to its location. Despite this, the city, which is one of the examples of advanced Roman architecture, is still standing. The statues of mythological gods are high-level examples of architecture.

After finishing our city tour, we go to our hotel to rest. Accommodation is in Izmir.

After breakfast at our hotel, we set off for the ancient city of Ephesus. Our tour, which started with the Gate of Hercules, will continue with the Bath, Agora, Temple of Artemis, Celsus Library and Amphitheater.

Ephesus Ancient City: The ancient city of Ephesus, which has preserved its beauty since 3000 BC, is one of the 12 lyon cities in the Aegean. The city came under Byzantine, Seljuk and Ottoman rule after Lyons. The city is completely covered with marble.

There are four female statues on the front of the Celsus Library, which is a remarkable structure. These statues symbolize reason, destiny, science and virtue.

After our Ephesus tour, we move on to the House of Virgin Mary.

House of Virgin Mary: After the death of Jesus St. John brought the Virgin Mary to Ephesus. On the dream of the German nun Emerich, the priests revealed that this was the place indicated after the research. The House of Virgin Mary, one of the Christian pilgrimage points, hosts an international mass on August 15 every year.

After taking pictures with the Virgin Mary Statue, we go to our restaurant for lunch. Afterwards, we go to Şirince Village for shopping and free time.
Şirince Village: The Mayan calendar was ending on December 21, 2012. According to his prophecies, the apocalypse would break out all over the world and only Şirince Village would be saved. You can buy handmade jams, tarhana, dried fruits and fruit wine in this village.

After our village tour, we set off for Kusadasi.

We make our boat tour against sunset and go to our hotel to rest.

Accommodation is in Kuşadasi.

After breakfast at our hotel, we set out for Pamukkale. Our first stop in Pamukkale will be Hiearapolis Ancient City.

After our ancient city tour, we move on to the travertines.

Pamukkale Travertines: You can swim in only a certain part of this natural beauty that took thousands of years to form. We enter the healing waters and enjoy the mud baths.

Then we go to our restaurant for lunch. Lunch is in Pamukkale.

After completing our Pamukkale tour, we set out for Konya, the City of Civilizations.

Accommodation is in Konya.

After breakfast at our hotel, we set out for Sille. The stone structures of this neighborhood dating back to the 7th century BC are eye-catching. First of all, we take a walk in the neighborhood where historical mansions are located. During the walk, we also visit the Time Museum. Afterwards, we sip our coffees against the Sille Dam view.

Sille Village: This village where historical mansions are located, is an old Greek settlement. The Hagia Eleni Church, built by Constantin for his mother Heleni, is here.

After our tour of Sille Village, we set out for the Mevlana Museum.

Mevlana Museum: The dervish lodge that reflects Anatolian culture the most. This museum, which also houses the tomb of Mevlana, who is known for his saying "Come, come again, whatever you are", stands out with its green dome. Manuscripts and musical instruments stand out in the museum. At the same time, the old copy of the Mesnevi is located here.

After the Mevlana Museum, we have lunch.

Afterwards, we set off for Çatalhöyük, the first example of settled life in the world.

Çatalhöyük: The oldest settlement belonging to the Neolithic period. The first house examples are found here. It is dated to 7000 BC. Çatalhöyük takes part in UNESCO World Heritage List.
After finishing our historical journey, we set out for Cappadocia.

We go to our hotel for accommodation.

We set out with our guests who will make a Balloon Tour in the early hours of the morning. Our tour where we can watch the fascinating nature of Cappadocia from a bird's eye view, takes about 1 hour. After our balloon tour, we go back to our hotel for breakfast.

Afterwards, we gather again at the appointed time and set out for Uçhisar Castle. Cappadocia consists of three parts, namely Başhisar, Ortahisar and Uçhisar. Uçhisar Castle is the highest area among them.

Uçhisar Castle: It is the biggest fairy chimney of Cappadocia. You can reach the summit by stairs from inside and outside the castle. It contains carved tombs, jars and a large cistern. The view is worth seeing. You can watch Cappadocia, which is covered with vast fairy chimneys, from a bird's eye view.

After our Uçhisar castle tour, we set out for Güvercinlik Valley.

Güvercinlik Valley: It got its name from the pigeon nests carved into the rocks. The people of the region have benefited from their manure and eggs by feeding pigeons for years.

Then we go to our restaurant for lunch. Our fisrt stop after Lunch is Pasabag Valley.

Paşabağ Valley: The valley that hosts the most beautifully preserved fairy chimneys of the region. In addition to the giant fairy chimneys, there is a chapel built in the name of St. Simon in the valley.

After completing our valley tour, we set out for Göreme Open Air Museum.

Göreme Open Air Museum: This is considered to be the place where the monastic education system was started. In this area, there are rock churches, chapels, dining halls and sitting areas. The Bible and Jesus Christ are depicted on the frescoes in the churches. On our tour of the museum, we see the Monastery of Girls and Boys, the Church of St. Basileus, the Yılanlı Church, the Dark Church, the Çarıklı Church and the Tokalı Church. This place takes place in the UNESCO World Heritage List.

After visiting the open air museum, we set out for our hotel.

Our guests can attend the Turkish Night Dinner if they wish.

Accommodation is in Cappadocia.

After breakfast at our hotel, we set out for Derinkuyu Underground City.

Derinkuyu Underground City: It can accommodate a large number of people and meet their needs. Unlike other underground cities, our underground city tour includes the missionary school, the confessional, the baptismal pool and the well. The place, which consists of interconnected rooms, is connected by narrow tunnels that only one person can pass through.

After completing our Derinkuyu tour, we set out for Narlıgöl.

Narlıgöl: It is stated that it is good for various diseases because it is very rich in calcium, sodium and bicarbonate. It is thought that the healing water, which is suitable for the treatment of rheumatic and skin diseases, especially psoriasis, is also good for blood circulation, heart, vein, blood pressure and neurological diseases. In addition, the use of appropriate doses also offers heliotherapy. It creates a romantic heart-shaped look where you get low water level.

After visiting the crater lake that is one of nature's best gifts to us, we go to our restaurant for lunch.

After lunch, a green walk awaits us. We set off for the Ihlara Valley.

Ihlara Valley: This is the world's largest canyon in which people live. The valley, which forms a whole with both history and nature, contains the Melendiz Stream. We take a long and fascinating walk from the riverside to the area where the churches and chapels are located. During the walk, you come across impressive rock carvings.

After our valley tour, we settle in our hotel. Accommodation is in Nevşehir.

We leave our hotel in the morning and set off for the airport.