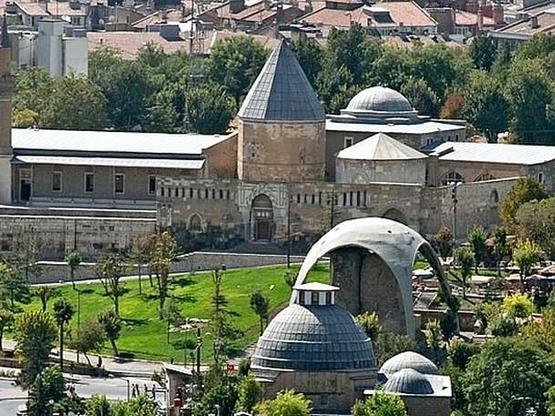 1. KARATAY MADRASAH:
Karatay Madrasah was built in 1251 AD by Karatay bin Abdullah, known as Mir Celalettin, the vizier of Izzeddin Keykavus II. The construction material is brick with smooth cut and rubble stone. There is a large crown gate on the left side of the façade. A door leads to a closed courtyard and from there to the madrasah building. The building material is brick with smooth cut and rubble stone. Masonry was used as a construction technique. In the Karatay Museum, wall tiles, china and glass plates, which are among the findings of the Kubad-Âbad Palace excavations on the bank of Beyşehir Lake, tile and ceramic plates, oil lamps and plaster findings from the Seljuk and Ottoman Periods in Konya and its region are exhibited.
2. ALAADDIN HILL:
Aladdin Hill is located in Karatay county of Konya Province of Turkey. The hill, which is at the size of 450 x 350 meters and 20 meters high, is one of the protohistoric settlements called tumulus. As a result of the excavations carried out by the Turkish Historical Society in 1941, it was understood that the first settlement on the hill started in the Early Bronze Age, around 3000 BC. After this period, it continued to be used as a settlement in the Phrygian, Hellenistic,
Roman, Byzantine, Seljuk and Ottoman periods. Today, it is a recreation spot besides its historical value.
3. ALAADDIN MOSQUE:
The Alâaddin Mosque, one of the largest and most important grand mosques of the Anatolian Seljuk State, was built on the Alaaddin Hill in the center of Konya. The mosque, whose construction began during the reign of Seljuk Sultan Rükneddin Mesud I (1116-1156), was completed during the time of Alaeddin Keykubad I (1221). The mosque was built in the style of Islamic architecture and covered with trees and soil. There are over forty marble columns belonging to the Roman and Byzantine periods in the building. The pulpit of the mosque made of ebony wood by Mengü Berti of Ahlat in 1155 is one of the masterpieces of Anatolian Seljuk woodwork. In front of the altar decorated with tiles, there is a dome decorated with tiles. The name of Muhammed Bin Havlan al-Dımışkî is written on the crown gate as a builder. In the courtyard of the mosque, the graves of Seljuk sultans Mesud I, Kilicarslan II, Gıyâseddin Keyhüsrev I, Rükneddin Süleyman II, Izzeddin Kilicarslan III, Alâeddin Keykubad I, Giyâseddin Keyhüsrev II, Rukneddin Kilicarslan IV and, Giyâseddin Keyhüsrev III are existed with a tomb with a second unfinished tomb built in the name of Izzeddin Keykâvus I.

4. SHAZIBEY MASJEED (AK MOSQUE):
It was built in 1429, during the period of the Karamanids Principality, with a single domed masonry stone technique with a central system. The architecture of the minaret is made with the Umayyad Kufic technique and wooden materials.

5. THIN MINARET MADRASAH:
To the west of the Alaaddin mosque is the Thin Minaret Madrasa, which was built in 1254 by the Seljuk vizier Sahib Ata Fahreddin Ali to teach hadith. The madrasah, whose architect is Kelük bin Abdullah, has &quot;Yasin ve Fetih&quot; suras written in Seljuk thuluth with embossed geometric and floral ornaments on the crown gate, which is one of the masterpieces of Seljuk stonemasonry. The interior of the building consists of a courtyard, an iwan, a classroom and a student cell. The base of the minaret was built using brick material covered with cut stone. It has a semi-pyramid shaped triangle and twelve corners, and the body corners are made of turquoise blue glazed brick with double balconies. It was destroyed by lightning in 1901 until the first balcony. In the madrasah, which was opened as a museum in 1956, stone and wooden works belonging to the Seljuk, Principalities and Ottoman periods are exhibited.

6. SIRÇALI MADRASAH:
Sırçalı Madrasah was built in 1242 by Bedreddin Muhlis to teach fiqh science. It is an open court madrasah type. There are tombstones belonging to the Seljuk, Principalities and Ottoman periods, which are very rich in terms of art. Sırçalı Medrese is one of the most important madrasahs of Anatolia, located in Konya. It is a two-storey madrasa with an open courtyard, two iwans. Cut stone and rubble stone were used. It was used as a madrasah until 1924.

7. SAHIP ATA COMPLEX:
The complex, built by Seljuk vizier Hacı Ebubekir Zade Hüseyinoğlu Sahibi Ata Fahreddin Ali, consists of a mosque, tomb, hankhah, double baths, fountains and shops. The construction of this complex, located on Larende Street, started with the construction of the mosque in 656H / 1258M and was completed with the renovation of the tomb in 682H / 1283AD. The complex layout plan is the mosque, a fountain in the north east corner of the mosque, a tomb built adjacent to the mihrab wall in the south of the mosque, a hankah next to the tomb, shops on the east side of the hankah, and a double hammam (bath) across the road.The complex does not have a foundation endowment, and a religious registry record dated 1280H / 1863AD states that the trustees of the foundation in those years held the foundation certificate-charter dated 677H / 1278AD. However, today there is no information about its fate.

8. IPLIKCI (YARN DEALER) MOSQUE:
It is on Alaeddin Street. It was built by Şemseddin Altunaba after 1201, it was enlarged and renovated by Somuncu Ebubekir in 1332. The mosque was named Iplikçi Mosque because it is located in the yarn dealers&#39; market. The mosque, which was used as the Classical Works Museum in 1951-1960, was reopened to worship in 1960.

9. SERAFETTİN MOSQUE:
It is on the south facade of the government building. Mosque was built by Şeyh Şerafettin in the 12 th century for the first time and was completely demolished in 1336 and re-built by Cavusoglu Mehmet Bey. The body of the mosque is covered with a large dome of cut stones. The dome is held by 10 elephant feet and is supported by a half dome to the south. The part where the mihrab is located overflows outside. Except for the southern part, there are second floor cellars in other directions. The mosque is decorated with inscriptions and embroidery. Its marble embroidered mimbar and altar is an admirable work of art. There is also a minaret with a single balcony added later.

10. KAPU (GATE) MOSQUE:
This mosque, located on Sarraflar (Çıkrıkçılar) Street in Konya&#39;s Odun Pazarı district, is known as Kapu Mosque because it is located next to one of the gates of the old Konya Castle. Postnişin Hasanoğlu Şeyh Hüseyin Çelebi, one of the grandchildren of Mevlâna, built the mosque in 1658. The mosque, which was demolished a while after its construction, was rebuilt by Konya Mufti Esenlerlizade Seyyid Abdurrahman Effendi in 1811. However, the mosque was burnt down in the fire of 1867 along with the foundation shops around it. After this event, the mosque was built for the third time in 1868. Although the name of the builder is not written on the inscription on the door arch of the mosque today, it is written that it was built in 1868.
It is one of the largest Ottoman mosques built in Konya and is made of smooth cut stone. There is a narthex with ten marble columns in front of the mosque. Columns in the narthex are connected to each other with round arches. There is no decoration of the low arched entrance door of the mosque. There is also one more door in the east and west directions. The place of worship is covered with eight domes inside and a roof outside. The stone altar and wooden pulpit are quite plain. The part of the minaret next to it is made of stone and the brick is above it. There are ceramic belts between the balcony and the cone.
The fountain in the west of the mosque was built in 1812 by Mufti Seyyid Abdurrahman.

11. AZIZIYE MOSQUE:
Since the mosque, which was built by Sheikh Ahmed between 1671 and 1676 in its place, was burned down, it was rebuilt in 1867 in the name of Sultan Abdulaziz's mother, Pertenihal, and was named with this name. Two minarets with fountains on both ends of the narthex with three domes seated on marble columns of the mosque, built in the Turkish Baroque style, draw attention. It is covered with a spacious dome. It is in the center of Konya. The temple built with cut Godene Stone is one of the most beautiful examples of the late Ottoman architecture.

12. HISTORICAL BEDESTEN (COVERED BAZAAR):
Nine-unit of bedesten in a classical-style was built in 1538 by Mevlana Kadri Çelebi, a mufti and cadilesker in the reign of Kânuni in Konya, which has been an important Anatolian city since the 13 th century. Restoration works have been carried out by Konya Metropolitan Municipality in accordance with the original and presented to the service of our citizens.

13. ZAZADIN HAN CARAVANSARY
It was built during the reign of Sultan Alaeddin Keykubat, in 1236 AD by the Vizier Sadettin Köpek, one of the Seljuk Emirs. It was built in a courtyard type, which is a combination of summer and winter types. The length of the inn is 104 meters and its width 62 meters. On the outer walls of the stone structure, some pieces from the pre-Islamic periods were used. The monument, which stands in a rectangular area in the east-west direction, consists of a courtyard and a closed part. The outer walls are reinforced with polygonal, square or cylindrical buttresses and corner towers, protruding and rising at the level of the roofline. The facades are striking with an abundance of stonemason traces, as well as lots of ancient antique materials.