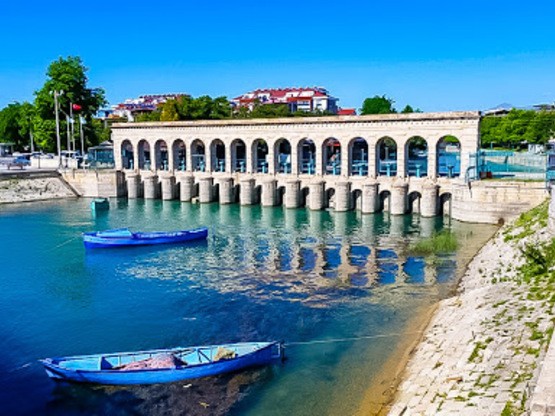 Lake Beyşehir
It is located in the region of lakes and is the largest fresh water lake of our country. Having a special place in our lakes with its wildlife, natural beauties and historical values, Beyşehir Lake is one of the most beautiful lakes in our country with its beautiful blue color, large and small islands, beaches, karst caves and unspoiled vegetation. The southern and northern shores of the lake are shallow and the deepest part is 10 meters. Mainly Carp, Sea Bass, Tinca, Dace and Cyprinus Carp are the fish species found in the lake. The vicinity of Lake Beyşehir has been included in the National Park Status as of 20.02.1993, and the national park area is 88,750 hectares. Its area is 651 km2, its length is 45 km, and its widest place is 25 km. It is surrounded by mountains whose height exceeds 2,000 meters. Its height above sea level is 1,115 meters. There are many islands in the lake. Some of those are Hacı Akif, İğdeli, Kızkulesi, Akburun, Mada, Yılanlı and Külbent islands. There is plenty of fish in the lake

BEYŞEHİR EŞREFOĞLU MOSQUE:
Being a unique example of the mosques with tree pillars in the old Turkestan cities such as Samarkand and Bukhara in Central Asia and located in İçerişehir parish of Beyşehir district, Beysehir Eşrefoğlu Mosque is the largest and original wooden pillar mosque in Anatolia and was built between 1296 and 1299. It is like a wooden mosque museum in terms of its monumental crown gate, unique mihrab (altar) and minbar (pulpit), superior wood and tile work. All of the mihrab is covered with mosaic tiles and it is larger than all tiled mihrabs with its 4.58 meters width and 6.17 meters height around Konya. The minbar is made entirely of walnut wood, with a superior workmanship and rich ornamentation, carved, glazed and unglued. The mosque is one of the most beautiful wooden examples of Turkish architectural style. Minbar, covered with octagons, pentagons, stars and geometric fillings and herbal decorations, has an incredible smoothness and delicacy that can be seen in nacre and ivory frameworks. The ceiling of the mosque has colorful hand drawn ornaments.
Especially the root-painted motifs on the consoles are striking. Eşrefoğlu Mosque is the only example that has all the following features seen in Seljuk mosques: Multiple wooden columns, the ceiling is completely decorated with wood and hand-work, and the minbar is completely made of wood and Kündekari technique. Eşrefoğlu Mosque rises on many wooden columns. For centuries, the snow on the roof of the mosque was thrown into the pool in the middle from the space in the middle of the roof and prevented the wooden columns from cracking and drying due to the stoves burned by moistening the environment. The mosque, which was admired by local and foreign tourists, is filled with rare examples of both stone and woodwork. Reflecting the magnificent examples of stone and wood craftsmanship of the Seljuk period, Eşrefoğlu Mosque was included in the World Heritage
Candidate List by UNESCO in 2012.

BEDESTEN (COVERED BAZAAR):
Looking at the inscription of Esrefoglu Suleyman Bey Mosque, it can be said that the construction of this work was completed in 1299 when the mosque was opened. It was repaired like it was rebuilt during the Ottoman period. It is one of the most outstanding examples of Turkish stonework. Being one of the oldest bedestens in Anatolia, it is very difficult to find a surviving peer. With this feature, it set an example for Ottoman Bedestens.

STONE BRIDGE
It is the first irrigation project established by the Ottoman State. The bridge also acts as a dam. It lies in the north-south direction and has 15 arches. It is an eye-pleasing structure and very robust. The waters pouring into the Çarşamba stream reach the Konya plain by traveling a distance of around 216 km.

KUBADABAD PALACE:
Kubad means the place that does justice and Abad means the joyful place. Seljuk Sultan Alaeddin Keykubat I established this city in the Gurgurum region that also was used to be a second capital for some time. Kubadabad Palace is right next to the lake and at the foot of Anamas Mountain. Since it is located in Tol locality near Gölyaka Town, it is also known as Tolöreni (Tolruins) among the people. According to Ibn-i Bibi, Alaeddin Keykubat, on his way from Kayseri to Antalya, passed through Konya and admired the beauties of Beyşehir Lake. It must be for this reason that he gave instructions to his hunting ameer and architect Sadeddin Köpek to build a palace here.

EFLATUN PINAR (VIOLET SPRING):
In a slightly undulating place, the spring rises up from limestone, about a hundred square meters at the foot of a flat hill. The monument also resembles the famous İvriz Relief in Ereğli. In the north, there is a magnificent monument with its face towards the spring. The monument, 7 meters wide and 4 meters high, is made of 14 enormous stones. It belongs to the Hittite period and is very important. Considering the monument form, it is dated to the Tudhaliya IV period. In this period, which coincides with the last quarter of the 13th century, Kuruntu, Tudhaliya IV cousin, ruled in the region where the monument is located. Eflatunpınar is one of the monuments in the old Anatolian style, in other words &#39;imitation of Hittite art&#39;, spread throughout Anatolia. Earth, water and the sun, which are regarded as symbols of fertility, stand out in the theme embroidered in Eflatun Pınar. The monument has that feature of the cult place.

TINAZTEPE CAVES:
It is located among the 7 wonders of Konya. It is located in Konya, Seydişehir district, on the 35 th kilometer of the Manavgat road. Total distance to Konya is 130 km. Total length of 1650 m. Its depth is 65 meters. It consists of two parts, fossil and active. If you enter the fossil section in the spring, it will be necessary to cross 5 lakes by boat. The same gallery can be passed on foot as the water decreases in autumn. After the fifth lake, the cave reaches the large hall with a 30-meter descent. This hall ends with the lake. It is one of the most important caves to see.